Using color, shapes, textiles and surface treatments, art quilts express a diverse range of emotions, opinions and stories. See some of those art quilt “stories” in a display from 5 pm to 8 pm on Friday, Aug. 3, at Hip Stitch, 2320 Wisconsin NE, as part of the ARTSCrawl program. The art quilts were created by members of the local Studio Art Quilt Associates (SAQA) chapter, and include selections from the recent SAQA show, Life Along the Rio Grande.

Art quilts emerged from the chaotic 1960s and 70s, as young people rebelled against mainstream industrial culture. They share a connection with folk art quilts and modern art, using a wide range of visual arts techniques and media to explore ideas and visions. SAQA is a non-profit, worldwide organization founded in 1989 to be a source of information on art quilts and the artists who create them. Learn more at SAQA.com. Some works on display are available for sale. Refreshments will be served.

Posted by Melissa Thompson Maher at 10:34 AM No comments: 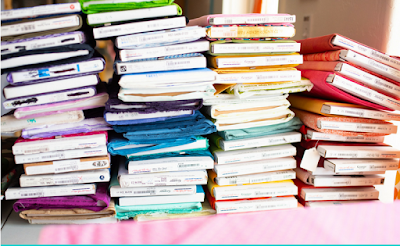 If you had daydreams about adding some great quilting fabric to your stash at summer clearance prices, then it’s time to WAKE UP! This weekend is your last chance to grab some premium Hip Stitch yardage, tools, patterns and books at 25%, 50% and even 75% off!

Final markdowns in our Semi-Annual Clearance Sale will be posted on Friday, July 27 (that’s tomorrow). If you shopped the sale earlier this month, you might want to take a second look. Fabrics are being added daily, and we’re deepening the discounts, so maybe this is your chance to pick up some backing fabric for, oh, next to nothing.

Here’s the main message, though: Buy the clearance fabric you love now. It may still be available later, such as some of our regional prints, but it won’t ever be at these prices again.

Posted by Melissa Thompson Maher at 8:54 AM No comments: 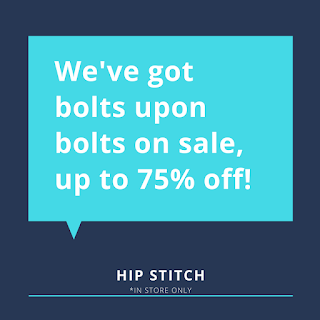 Friday the 13th is no longer an unlucky day for the superstitious or a classic slasher movie. (Sorry, Jason!) It’s THE day we launch our Semi-Annual Clearance Sale at Hip Stitch!

Beginning July 13, selected fabrics, patterns, books and sewing machines are all on sale—from 25% to 75% off! It’s unprecedented and unmatched. 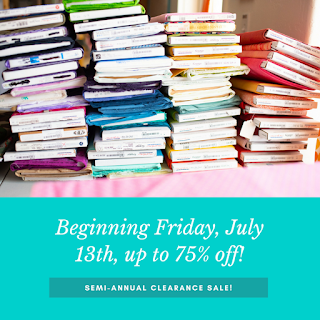 Now, there are sales and then there are SALES. Grunges, solids, batiks, designer fabrics from major names like Tula Pink, Victoria Findlay Wolfe, Latifah Safir and more.

You count on Hip Stitch to bring you the freshest fabrics and latest designs. And we’ll do what it takes to deliver on that promise. That means we will not be undersold -- this inventory must be turned into cash to keep up our forward momentum and keep the best and newest fabrics coming in the door.

We've hinted a couple of times already in our Hip Stitch newsletters about the amazing depth and variety of goods that are marked down. And in just a few hours, you can see the bounty for yourself. This is the sale to wait for.

Posted by Melissa Thompson Maher at 8:16 PM No comments:

They can do just about anything. Such as open a sewing-related business that has weathered the marketplace storms over 10 years to become one of Albuquerque’s most popular spots for fabric, fiber art, sewing know-how and creative inspiration.

That’s how Hip Stitch happened. Ten years ago, the buzz phrase in the DIY world was “sewing lounge,” as in a place where (mostly young) people could come together and sew, use a machine and/or iron if they did not own one, maybe take a few classes.

Albuquerque mom Suzanne Kelly and her friends Jen Dean and Heather Gordon—all PTA-ers—decided to capitalize on this groundswell of interest and open a sewing lounge/fabric store.

“I’ve always had a love of sewing,” says Suzanne. “I was a stay-at-home mom with two young daughters and wanted to work again, but use my creativity. We wanted to fill a void by opening a sewing lounge for Albuquerque.”

Opening day was July 7, 2008, and boy have things changed! Shelves were stocked with about 50 bolts of fabric that first day; now, Hip Stitch has about 3,000 bolts, including the area’s freshest, most fashionable fabrics for quilting and sewing. We're also the area's premier provider of Southwest and regional fabrics such as Frida Kahlo, Dia de los Muertos and Route 66 prints, and the ever-popular balloon and chile pepper prints. The shop also has the state’s largest collection of Grunge near-solids.

Heather and Jen each moved on to other
business activities, and current co-partner Steve Hamlin joined the team in 2014. Fueled by a seven-day sales week, bigger inventory and an ever-growing customer community, Hip Stitch relocated in 2017 to its location at 2320 Wisconsin NE. It is a part of the local Shop Stroll each August, which attracts thousands of stitchers, and it’s a regular stop for families who flock to Albuquerque for local Native American ceremonial dances.

The new digs seemed cavernous when Hip Stitch staffers met there in late 2016 to see the space and hear about build-out plans. Now, use of its 3,000 square feet of selling floor and class lounge is a crazy dance as the staff juggles multiple classes, events, meetings of community fiber arts groups and the various fabric collections, with more new prints coming in every week.

There are many unforgettable stories or people in Hip Stitch’s first 10 years.  Suzanne remembers one customer in particular.

“Tom was the most unlikely typical customer,” Suzanne recalls. “He had lived a hard life, battled heroin addiction, but he had the sweetest demeanor and wanted to learn to sew a hat.”

So she taught him.

“That grew into a friendship where he'd come to the lounge and sew a little, then sit in an armchair and fall asleep for a bit.  When I heard of his death, it was like I had lost a sibling.  I still have the funny homemade Christmas card he gave me one year, made out of a paper grocery sack,” she says.

There were more than a few challenges along the way, too! Such as the original location, where the rapidly expanding inventory gobbled up space.

In the old location, there was a wall that separated the lounge from the sales floor. When fabric bolts reached critical mass, that wall came tumbling down. It created much needed display space, but it meant classes—
and privacy—went on hiatus.

“There was no office space, no classroom, and towards the end of our time there—and before we found our current location--I would have some stressful days trying to get back-office work down with no back office!” Suzanne says.

At a time when quilt shops nationwide are frankly struggling to compete against on-line shops, shop owner retirement, changes in stitcher buying habits and changes in the fabric manufacturing economy that feeds inspiration and yard goods to the creative stitching world, Hip Stitch is bucking the trend. And community is the key.

Hip Stitch staffers--including Suzanne's daughters Jane and Claire, who have grown up working behind the shop counter--have played a huge part of building that community. All told, the staff and teachers have more than 300 years of sewing/quilting experience, but it's how they interact with the sewing public that has made the difference.

“Customer service has always been my number one priority - providing a warm, nurturing atmosphere to create,” says Suzanne.

“It's not about how many bolts we have, or how experienced we all are.  If we at Hip Stitch don't provide a great shopping experience, I've failed at what I set out to do. And nothing beats face-to-face service and a fun atmosphere where we gather as a community with our shared passion.”
It sounds trite, she continues, but there’s more that connects the Hip Stitch community than mere fabric or thread.

Posted by Melissa Thompson Maher at 12:17 PM No comments: