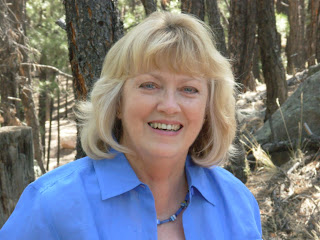 What inspired you to create the design?

I was excited about “Sew Musical” with ideas coming easily. My first thoughts and designs incorporated the sock monkey (Hey! Hey! We’re the Monkees!) that Hip Stitch uses for advertising. But that is a generational thing that not all age groups would be able to relate to. I searched the internet for music titles and lyrics that might have a sewing/stitching connection, but there didn’t seem to be anything out there. Looking through a sketch pad I have, I found  quilt blocks I’d collected that were related to the southwest. The one I based the design on is called “Rocky Mountain High”. I don’t recall where I found the block to include in my sketch pad. Of course, I had to complicate the block by designing a rainbow behind the piano keys. The piano keys look difficult, but they are simple to paper piece.
what techniques does it include
When I showed sketches to Suzanne and Steve, they mentioned that some customers commented that most of the Row by Row blocks seemed to have a heavy use of appliqué. That why we decided to go with this one. The 18” x 18” block is comprised of 9 blocks set on point. Six of the blocks are paper pieced. Instructions are written for paper piecing but the maker can decide to cut out each piece with ¼” seam allowances and piece them that way. Three of the blocks at the base are to be machine appliquéd. They also can be hand appliquéd if the maker desires. 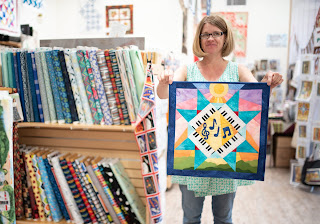 The block uses 17 different fabrics and lots of pieces/shapes. Some of the 9 blocks have many pieces, some just a few. It’s too scary to count them!

I know this is your third block for Hip Stitch....how was it different to use the new configuration? (More flexible, harder?)

I love that we were given a choice of which shape/size we wanted to use this year. The object of this game being to collect many different blocks from many different shops allows the collector more flexibility in constructing a final product to showcase where they’ve been and what they collected. The 9” by 36” row was restrictive in what you could do with them after they were completed. I did look at the other sizes, but liked that the square was close in size to an album cover (not that everyone remembers what those were!)

How long have you been sewing? How long designing?

I learned to sew from my mother and grandmothers. I was 10 when I started making and designing doll clothes for my Miss Revlon doll. She was shorter than Barbie and better proportioned. I won ribbons at the county fair for several years until I moved on to sewing garments for myself. I made most of my clothes through junior high, high school and college. My first major at Eastern New Mexico University was Home Economics (when it was called that), with a second major in journalism. When I was in junior high, the mother of a friend was a seamstress who had a studio full of fabric and dress forms. Julie and I would spend hours draping our models and creating stories about where these ladies were going to wear our creations. That is such a wonderful memory.
I started quilting when my sons were young and I was a stay-at-home mom. I’ve been a fabric collector for a long time so there was never a lack of materials with which to play and experiment. I started designing my own quilts after moving to New Mexico in 1989. I’ve always loved quilts that other people design and make but always felt there was no point in remaking what someone else has done.

I’ve really enjoyed the relationship I have with Suzanne and Steve at Hip Stitch. It’s exciting to see my Row by Row blocks in the store and to talk to quilters who have constructed what I created.