Lisa Pries-Linn, who works at Hip Stitch on the weekends, just returned from the Sisters Outdoor Quilt Show in Oregon.  It was her fifth consecutive trip to one of the world’s largest quilt events.  Lisa’s sharing her favorite moments with us.

Hi, fellow Hip Stitchers, Lisa here with a few of my favorite things about the Sisters Outdoor Quilt Show.

I took an all-day class with the wonderful Jacquie Gering.  In my humble opinion, Jacquie is the queen of modern quilting.  In this class, Jacquie focused on “scrappy improvisation.”  According to Jacquie, if you add background fabric to the edges of a scrappy block, it will be very hard to see where one block begins and another one ends. This is one of the hallmarks of modern quilting.  This is a picture of my class project, which I plan to finish within the next few weeks. 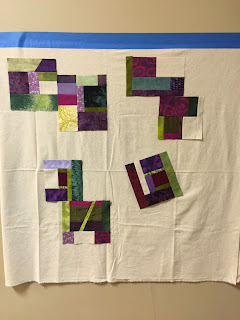 After seeing the "Best of QuiltCon" exhibit at Albuquerque Fiber Arts Fiesta in May, I saw it again in Sisters.  This time, the award-winning quilts were hanging from trees, porches of homes, and the exterior walls of businesses that line the main drag through town (population 2,000).  It was a thrill to tell the visitors at Sisters that the exhibit made its debut in Albuquerque and that I helped install the Albuquerque show. 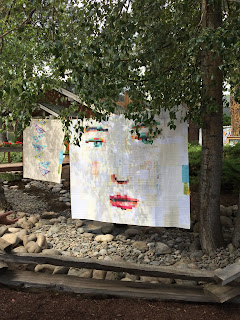 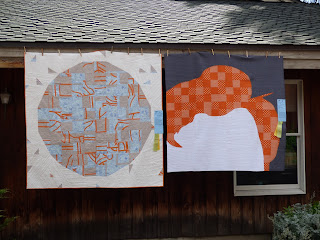 Tula Pink, fabric designer extraordinaire, gave a terrific lecture.  She’s so young!!!  When she designs a fabric line, Tula said she creates fabrics that feature recognizable images, like a 16th century Queen Elizabeth, along with fabrics that are strictly geometric in pattern.  Tula said combining the fabrics adds so much interest whether you’re making a quilt, bags or garments.  Tula gave us a sneak peek of her Eden line. 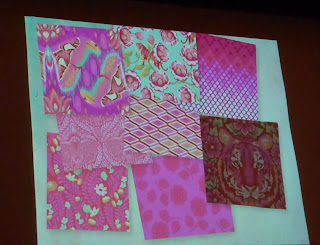 After Tula’s lecture, I joined the team to hang Tula’s quilts around Sisters. 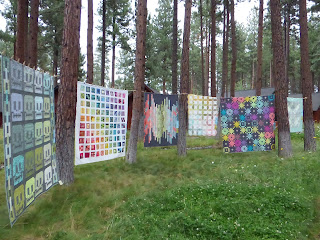 I’ve been going to the Sisters Outdoor Quilt Show for five years and the presence of modern quilting has been growing steadily.  At the July 2015 show, I believe the mix of modern to traditional was 50/50.  I wonder if modern will eclipse traditional in 2016? 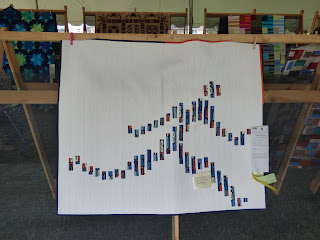 When you’re in Sisters, it pays to strike up a conversation with someone admiring the same quilt you’re ogling.  That’s how I met Julie Herman of Jaybird Quilts.  Julie said she puts two layers of batting in her quilts because it gives the actual quilting a stronger visual presence.  Talk about a hot idea -- I think I’m going to try that. 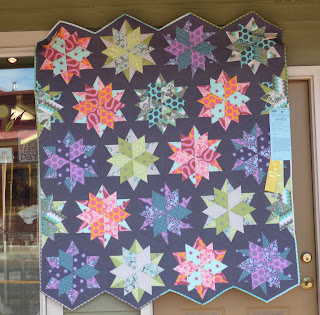 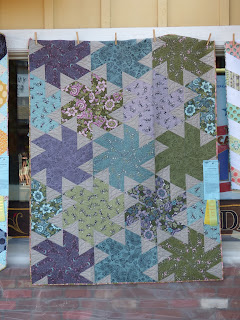 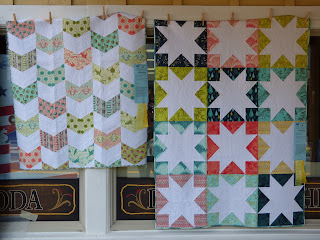 At an upcoming meeting of the Albuquerque Modern Quilt Guild, Lisa will be going into more details, along with a picture slide show. If you're a member of the ABQMQG, we'll see you then! If you're interested in attending your first meeting for free to check it out, email or call Hip Stitch for more details!

Posted by Hip Stitch at 9:17 PM No comments: